PTSD IS NOT AS MUCH FUN AS IT SOUNDS

I had a Leave It To Beaver childhood and a Laura and Rob Petrie kind of marriage, and still, doctors tell me, I have symptoms of Post Traumatic Stress Disorder, or PTSD. I must have been scared, and scarred by my childhood, as we all were, and my psyche is going for the gold. 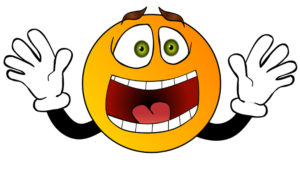 But, what does that mean? In my case, an editor who writes inside a lovely three and a half sided work station that rises just above my shoulders as I sit at my PC, with dozens of writers and artists outside my walls — it means I will scare the pants off of you if you sneak up on me.

Don’t whisper my name. Somehow, some way, the word Carol whispered is the equivalent to shaking a dead mouse in my face. A young graphic artist with a Jesus hairdo and a smile tried it, and I almost brought him to the floor. I’m not usually that on-point. With the balding Telecom guru, I merely threw my arms in the air, shook my hands in his face and gasped. He back-stepped out of my cozy cubicle so fast he almost tripped over his own loafers. “I always have that effect on women,” he said, by way of apology.

He must be a live-and-learn kind of guy, because when he stops by to check on my possessed phone, which speaks Spanish to him when he calls from “the office,” he stands outside my area and clears his throat until I look up.

After my first assault on an innocent victim, I thought of posting a sign outside my walls. But the name and initials of my PTSD disorder escaped me. It isn’t something I want to dwell on, after all. And, all I could think of saying was something like this:

Please excuse me, but I have STD and if you whisper anything behind me I’ll tackle you and scream in your face.

Chalk it up to a startled creative of a certain age, but that part of my brain that keeps acronyms straight wouldn’t cut me a break. Sexually Transmitted Disease, STD; or Post Traumatic Stress Disorder, PTSD all sounded the same to me.

Besides, this message is better. More startling. Shoot, I bet it would even keep thieves away. At the end of my spell, I refrained from printing that sign. I decided I wanted to keep my new friends, and my job.

If ya like it, hit the heart below, I want to know if I made you smile. If you want me to write for you, get in touch here. I’ll get back to you.

LIFE IN THE FAST LANE Confessions of a GPS Dummy 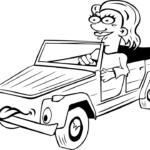 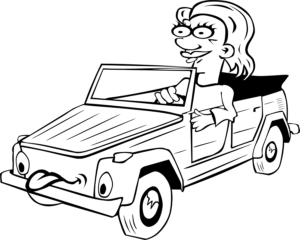 Pardon me, boys, but if you’ll just step out of my way, I’ll go get lost on the next street over.

Confessions of a GPS Dummy

My phone won’t talk to me. It will talk to my husband in three voices, his choice. but it clams up when it knows I’m lost. Maps is the answer to my navigational needs. That’s what my advisors say. “It’s your own private guide. Depend on it. Use it, Mom!” The last time I did that, I ended up on a winding residential road at night cruising past groups of young men leaning on cars and drinking from cans. Maybe they were some kind of neighborhood watch. They sure kept an eye on me.

But, I can’t be the only one failing at Maps. Others must have troubled relationships with technology, too. I’d feel so much better if I knew that to be true.

I’ve tried to mend fences. I really have. Instead of snarling at the lifeless phone in my hand, or saying things even soldiers shouldn’t say, I pull over and tap the little picture of the megaphone, for the millionth time, and a woman’s smokey voice coos, “Unmute.”

Hotdog! I’m back in business! I pull back out into traffic and drive. If only Silent Sal will put down her cigarette and tell me which way to turn. But, alias. No. She’s not speaking to me. I finally find my way to my destination and back home in the dark, without meeting anymore young men with cans along the way.

With my phone on the ottoman beside my bare feet, I settle in for a tet-a-tet. House dress, glass of wine, and a TV remote in my hand, I’m ready for a meaningful evening with the man I love. As he looks into my eyes and asks that all important question, “Do you want to watch Jeopardy or can I watch the game?” my phone vibrates and speaks right up. “Your destination is on the left,” she says. But, hey, I could have told you that.